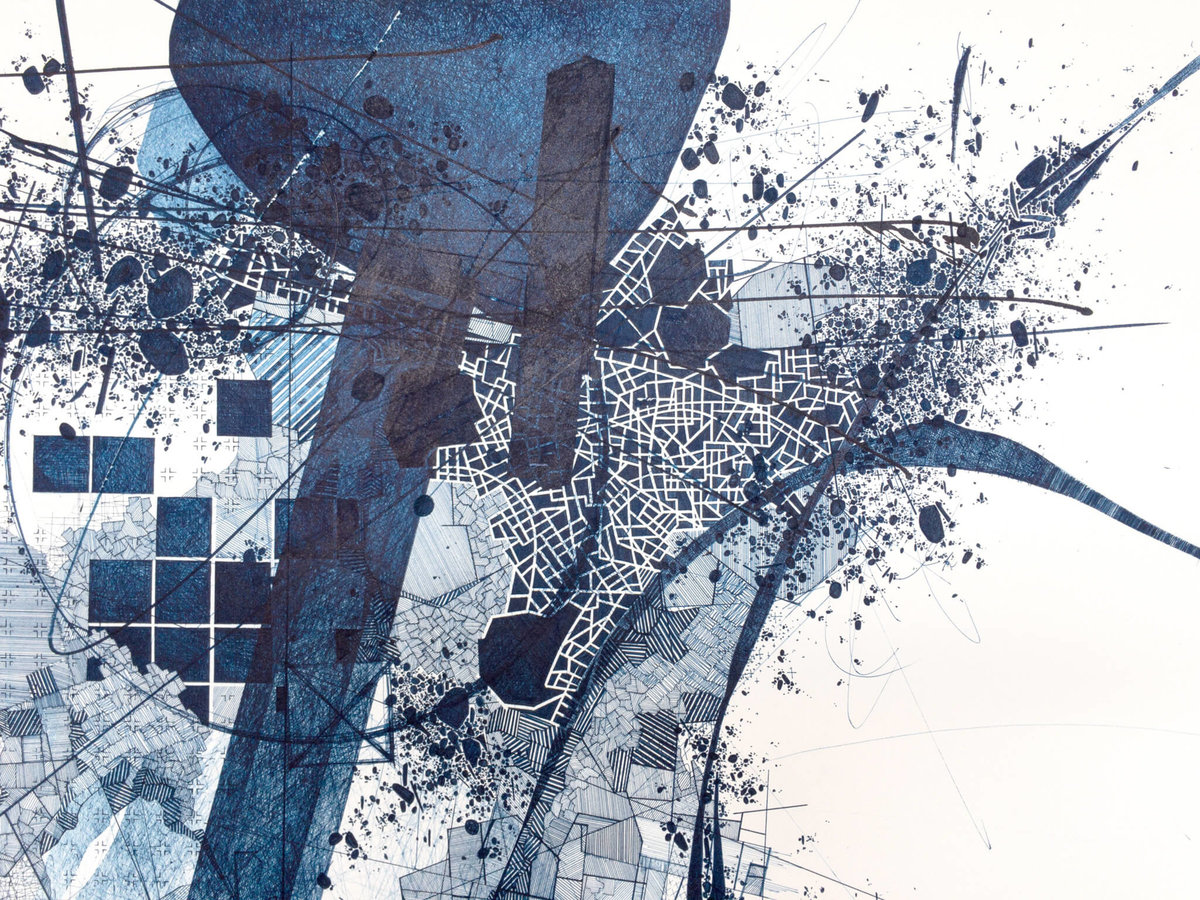 Derek Lerner's monocromatic drawings show which closes at Robert Henry Contemporary October 22nd,  evoke a feeling of flight. These works are topographical and beckon one to look closely at the terrain layed out by the artist. I had a chance to talk about these works with Lerner in New York City and this is that conversation...

Noah Becker: When do you remember first making art?

Derek Lerner: I remember making forts and other stacked up constructions out of these preprinted cardboard boxes that looked like stacks of bricks. This was right around the time Jimmy Carter was president as I recall. I also have a clear memory of looking at books on how to draw Mickey Mouse around that time, so the short answer is - since I was a child.

Becker: What is it about making drawings that interests you?

Lerner: This question sort of calls back to your first question in a way. Other than finger painting or building forts, drawing was one of the first things remember doing. There is purity to mark making that I enjoy. Something about turning "nothing" into something is magical, and as a side, note I was a dedicated magician as a preteen.

Becker: Yes, Alberti talks about similar magic in his book on painting. The blue tone of your drawings creates a lot of depth, so how do you think about color in your work?

Lerner: I'm pleased you find a lot of depth in my drawings, as that has been something I've worked hard to achieve. That aspect of my work has less to do with any specific color than it does with my choice of materials and time spent working with them. Through a process of elimination and experimentation, I arrived at using the specific blue color and type of ink for my drawings. Initially this choice was a very fluid decision, because I wanted to break away from solely using a color palette of black, white and grey that the first few works in my Asvirus series were created in.

Becker: How did it begin?

Lerner: What began as a technical problem I was attempting to solve turned into a solution of simplification. This restraint met both my conceptual and technical needs in achieving a dense, diverse, rich and layered drawings.

Becker: And the monochromatic blue?

Lerner: After making a lot of work solely in blue, I read a 2012 NY Times article about the color that solidified my gravitation towards it, and understanding of how special and important it is.

Becker: That’s an interesting article, thanks. I should say that you're from outside of New York City. Was there an influence that manifested itself in your drawings as a result of living here?

Lerner: Living in NYC for the last 18 years has been influential to my life. Obviously a lot has taken place in the world over that duration so I'll answer your question with a story that might express my sentiment.

Lerner: In my final year of high school at Douglas Anderson School of the Arts in Jax Fl., a few of my classmates and I took a trip to a portfolio review at the Atlanta College of Art, along with our teacher. As we drove into the city I got very excited realizing there was a subway system there - I had no idea. My excitement was to the point that I remember being made fun of about it. Only years later, after living in ATL for a long time, was I let down by MARTA not living up to my MTA expectations. I suppose I equate my interest in transit systems to a circulatory system of a city. Although I probably just was excited because in the 80's as a teen, I was consumed with skateboarding and writing graffiti. Quite a lot of the work I've made, for well over 20 years, has been inspired, in one way or another, by urban environments and the complexities within them, so yes I'd say my intimacy with NYC has been and continues to be, a never ending source of inspiration.

Becker: Hmm, interesting story. But I realize you make drawings that have an aerial feel of looking from above at cities or landscapes. Do you feel like your drawings are simultaneously representational and abstract?

Lerner: I sort of prefer using the words abstract and conceptual to describe my approach and thinking, so definitely not directly representational or illustrative. Along with aerial points of view, I'm also combining microscopic and telescopic vantage points and references - "Powers of Ten" is a favorite. There is a hypertext-esque way of thinking involved, but any collage/meta/referential language/imagery ultimately ends up as ingredients in my soup.

Becker: What first inspired this direction?

Lerner: It's difficult to exactly point that out because a lot of the visual vernacular in the drawings pulls from things I was making as far back as Junior High School. At some point in the early 90’s I learned about MIT Prof Muriel Cooper’s “Information Landscapes” which was highly inspiring to me. Later, I was reading William Gibson's Neuromancer and was inspired by "The Sprawl", a fictional megacity. I was also listening to Sonic Youth's "Daydream Nation" album a lot.

Becker: That’s interesting, I’m friends with Lee Ranaldo of Sonic Youth, who is a great artist and also his wife the artist and filmmaker Leah Singer. There’s an interview we did with Lee here in Whitehot Magazine. Lee also appears in our documentary “New York is Now”. This makes more sense to me thinking about your influences but tell us more.

Lerner: Sometime in 97, I made a small graphite drawing on paper of an imaginary cityscape from an aerial point of view. I don't think I was directly inspired by Neuromancer, but I'm sure it had some sort of impact, looking back on it now. Keep in mind this was pre Google Earth, so any satellite based reference materials I had were mail ordered.

Lerner: Yes, around that time I was working on a series titled Order and Chaos where I was mixing concepts about organic and inorganic, primarily focused on cities. I was also working on another series titled “Human-Digital” which dealt with human interaction with technology. I made a handful of pieces in the late 90's that explored similar topics and mark making to the work I'm currently making in the studio to this day.

Becker: I see, so it kind of evolved that way, somewhat slowly…

Lerner: Yes, there has been a slow evolutionary process to the development of my Asvirus series. In 2000 I made a few small ink on paper drawings as Christmas gifts to friends, which more closely resemble what eventually grew into this body of work. When the northeast blackout of 2003 took place I stayed in my studio and began working on the first piece that would later be titled "Asvirus 1". I was still figuring out what these things could be, or if they were worth pursuing. I kept thinking of them as drawings about drawing at first, but that always seemed to feel a bit contrived to me. It was not until much later did I begin to take this work more seriously, mainly because it just kept creeping back up my mind over the years and I finally gave in to it.

Becker: Where were you at that time?

Lerner: I was flying back into NYC from a long overseas flight. It was at night, coming into LGA, and the city was gorgeous. I was in that sort of jetlagy haze and thought to myself simultaneously, this is beautiful and amazing, but fuck - we are just destroying the world. This is where the title came from for the series, humans as a virus on the planet, Asvirus. After making the decision to focus on this work it almost immediately felt much stronger to me and I was hooked at that point.

Becker: I see, so that’s why the idea of humans in nature or humans in cities is evoked in your drawings. Do you have the concerns of an activist or is it mostly a visual experience for you?

Lerner: The work is abstract, personal, empathetic, documental and/or reactionary to my life experiences and interests. The topics I'm inspired by are usually of-the-moment or about the near future. I tend to have a darker view of where the world is headed, but I don't consider myself an activist or my art to be "activist art".

Lerner: I do believe art has the ability to inspire social change, but doing so is not really the driving force behind the creation of my work. I'm responding on an emotional and expressionistic level. If I was making works that were mostly about the visual experience I'd feel as if I was making decoration or illustrations - which is definitely not my intent.

Becker: Do these works translate into sculpture or painting?

Lerner: For the most part I've been a multidisciplinary artist, so I'm usually exploring multiple mediums. In 2007 I made a piece titled "(IN)BETWEEN SL" which was a virtual sculpture in Second Life - you can see documentation of it here. The title of this piece is reflected in the title of my current solo exhibition at Robert Henry Contemporary. For the last few months I've re-approached an idea I began working on in 2009 in which I made virtual drawings in 3d space presented as videos.

Lerner: I've thought of these as drawing/sculptures as variable media artworks that have the ability to take on multiple forms. Most recently I've explored presenting my 3d drawing/sculptures in augmented reality using Apple’s new ARkit framework for iOS. Unfortunately I've had great difficulty getting my App approved for distribution via the App Store, because they decided to have a tight fist around what's accepted as an AR app within the last month. Needless to say this is still an experimental work in progress - you can see documentation of this here.

Although not sculpture or painting, I'm publishing "CACHE", which is an ongoing series of ePUB sketchbooks/journals. Each 100 page iBook includes references, inspirations, notes, behind the scenes and work in progress art studio imagery as well as other relevant miscellaneousness. Two are currently available here.

Becker: Thanks I'll take a look... But back to the drawings, are the blue monochrome drawings an ongoing series?

Lerner: It is an ongoing series, which has evolved a fluid and organic manner over time. The work has informed me along the way. I've just been paying attention to what it is telling me might be next. I've found that the more time I spend focusing and refining what I'm doing, the more sophisticated the work becomes.

Becker: What is coming up for you Derek?

Lerner: Making more drawings and if all goes according to plan, my MTA Arts & Design commission for permanent public art for the entire Avenue X subway station in Brooklyn will be installed this month. It is six large-scale multi-panel glass compositions. Beginning in November the "Poetry in Motion" subway car card in which one of my drawings has been paired with a poem by Pulitzer Prize awarded poet Charles Simic will begin display throughout the transit system. WM