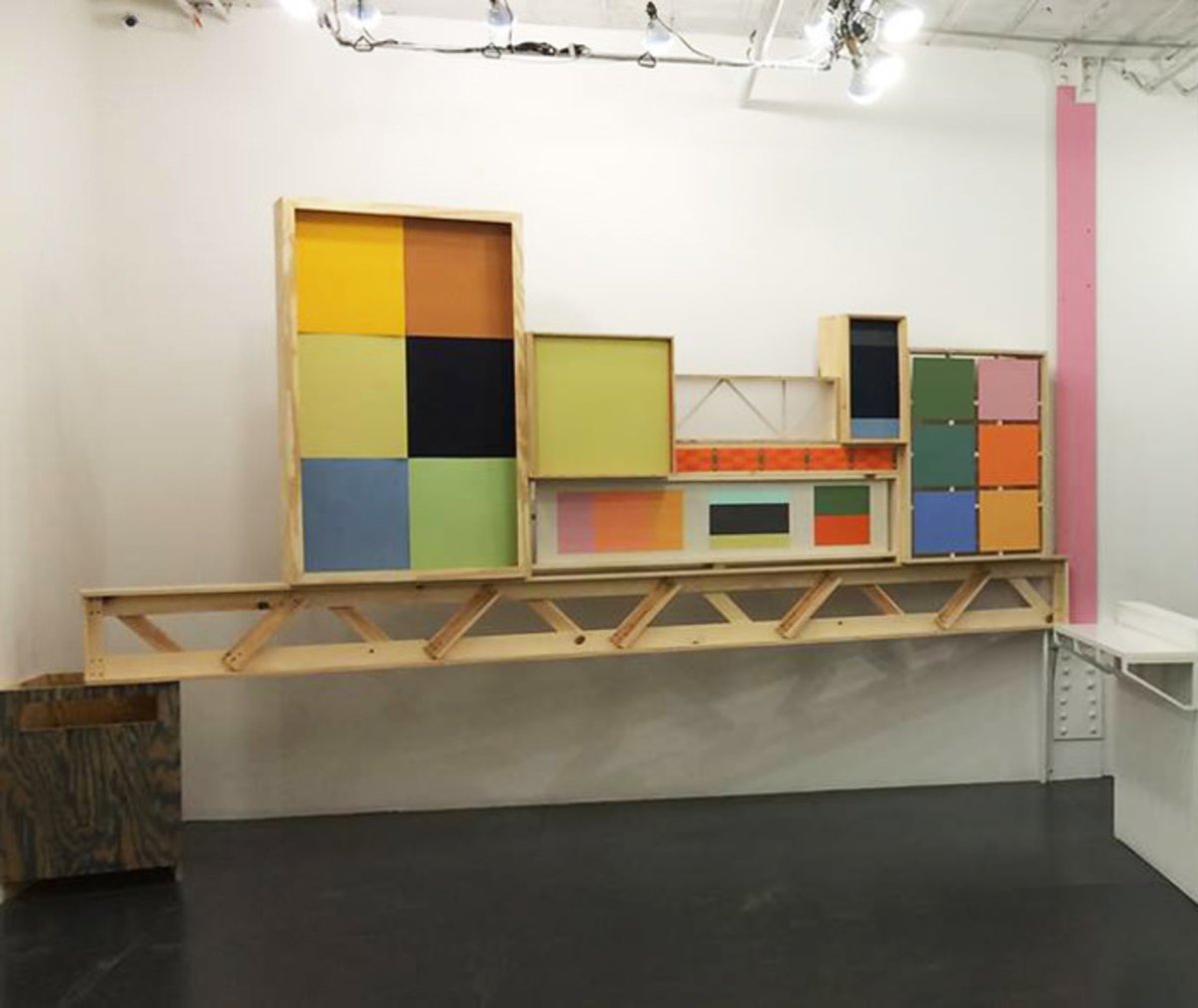 A number of noteworthy exhibits opened in and around Bushwick in recent weeks. At Victori+Mo, Langdon Graves has transformed the entire gallery into a somewhat blindingly pink, personal-phantasm-filled, glorified domestic diorama of sorts—just in from Florida, perhaps, and the year 1982—in which an amusingly spectral narrative can be built out of a handful of carefully inserted, minutely devilish details. Microscope Gallery, whose programming is devoted primarily to film, photography and video, have lined their broad expanse of now even more gleamingly white space with paintings made by filmmakers, or that somehow reference film or photographic processes. Not a Bushwick gallery at all, Cheim & Read took advantage of a temporarily vacant warehouse studio near the Halsey stop to mount Circa 70, a harmonious suite of now placid, now electrifying, generally absorbing, fairly massive works from the titular decade by Sean Scully. Make it a point to visit these shows if you can, while you can.

Make it a point, that is, because you should make your way out to Bushwick sometime soon anyway to see a solo show at Songs for Presidents, a two-person show at ART 3 Gallery, and a three-person show at Robert Henry Contemporary. At the latter, an exhibit called Bits and Pieces features two site-specific installations that dominate the space in extremis—at the furthest reaches of either side of the gallery, that is, and from floor to ceiling. To the left upon entry you’ll find Jim Osman’s Curtain, a large, block-like, subtly colorful construction of wood and paper that has a somewhat cheerful aspect despite its many unrounded angularities; that might’ve come out of a large- scale toy set intended to teach baby giants about Mondrian; that seems to be doing a fine impression of Florence’s Ponte Vecchio, or of some other exemplar of temporally agglomerative architecture; and in which physical heft, realized here with materials that are rather un-curtain-like, seems to nearly disappear. On that note, the cleverness of Osman’s choice to paint a certain exposed I-beam pink and gird it with a little wooden ridge should not be overlooked. Opposite Curtain is Hedge, a most botanically suggestive installation of folded paper pieces by Liz Jaff that registers a bit like a large white curtain, in fact, and a bit like a chlorophyll-free wall of ivy, and a lot like a grand, elegantly dreamy portal of sorts out of one of C.S. Lewis’s more fantastical books. In other words, there’s something implicitly escapist about this piece; its apparent formal endlessness points both inward, outward and upward to some narrative elsewhere. What kind of Narnian treasures, fears or lessons, for instance, lie beyond? Back to this side of the ‘wardrobe,’ as it were, a series of meticulously bundle-packed, content-filled, data-fed, squarely ordered collages by Pauline Galiana very cleverly mediate—on levels material and chromatic alike—the walls stretching from Osman’s installation to Jaff’s. Bits and Pieces at once hems you in and nudges you beyond.

A few blocks away at ART 3 Gallery is Matter & Conjecture, a rigorously selective display of paintings by Kes Zapkus and sculptures by Stefan Gritsch. The latter’s works—somewhat casually shaped, significantly layered objects built out of acrylic paint and other occasional materials, such as bone rings from cross-cut shanks of meat—exude airs of palpable fun, given their toy-like sizes and forms, Play-Doh-like palette, and somewhat chewily malleable materiality. Zapkus’s paintings, meanwhile—represented here by a few recent pieces alongside a couple executed several decades ago—are more chromatically nuanced, cooler, quieter, more formally austere, but they warm up quickly upon considered inspection. A kind of compositional trickery, this optical temperature shift is most dramatic in what is essentially the exhibit’s centerpiece, a painting called The Nervous System, a relatively large, basically square work in which reds and whites reign supreme over a range of subtly intervening colors—now embedded, now overlapping—to produce a bedazzling, almost auratic image of what might be an architectural footprint or urban topographical map, a blown-up  microorganism or fossil of some ancient cephalopod, a rendering of thermal registers or of data-hungry circuitry, or an aerial view of an archeological dig revealing the partially excavated ruins of some lost civilization. It’s a painting that’s very hard to stop looking it as it continues to open and unfold itself, yet the subtle array of its constituent elements serves to point around to the rest of the show as well, and fittingly so.

Quite a ways deeper into Bushwick, and not too far from Cheim & Read’s temporary outpost, is Songs for Presidents, where Charles Goldman’s site-specific installation—or rather, total spatial invasion of the gallery’s demi-subterranean, narrow, low-ceilinged exhibition area—is a gargantuan, grey, tongue-like, questionably stable structure made of undulating lengths of particle board, perched atop cement blocks, and tethered up into an ostensibly half-sprung spring that seems verged upon wreaking havoc fore and aft—in the event of a minor breach of material integrity, that is, or of some slight degree of physical tweaking encouraged by a meddling, over-curious onlooker. In other words, leave this apparently quite physically inviting sculpture, so properly titled Tongue, alone, but have fun musing about how it got there, how far it might potentially extend, how precariously it’s balanced, how it offers both a suggestion for more entertaining walkways and a metaphor for truncated communications—a place where tongues are silenced and tied, where sidewalks buckle and end. Speaking of keeping your mouth shut, be sure to do so if you decide to take a ride on Goldman’s Vibrating Sidewalk. Stand atop it, flip the switch, brace yourself, mind your teeth.

The three-person show described here is on the first floor of a building, but up a dozen or so stairs. The two-person show is at a ground-level gallery. The solo show is in a basement space. These are not awfully insightful or useful statements, but they might seem slightly more so in light of this closing observation: all three shows pertain to various levels of infrastructure. I’ll leave all these ups and downs right there.