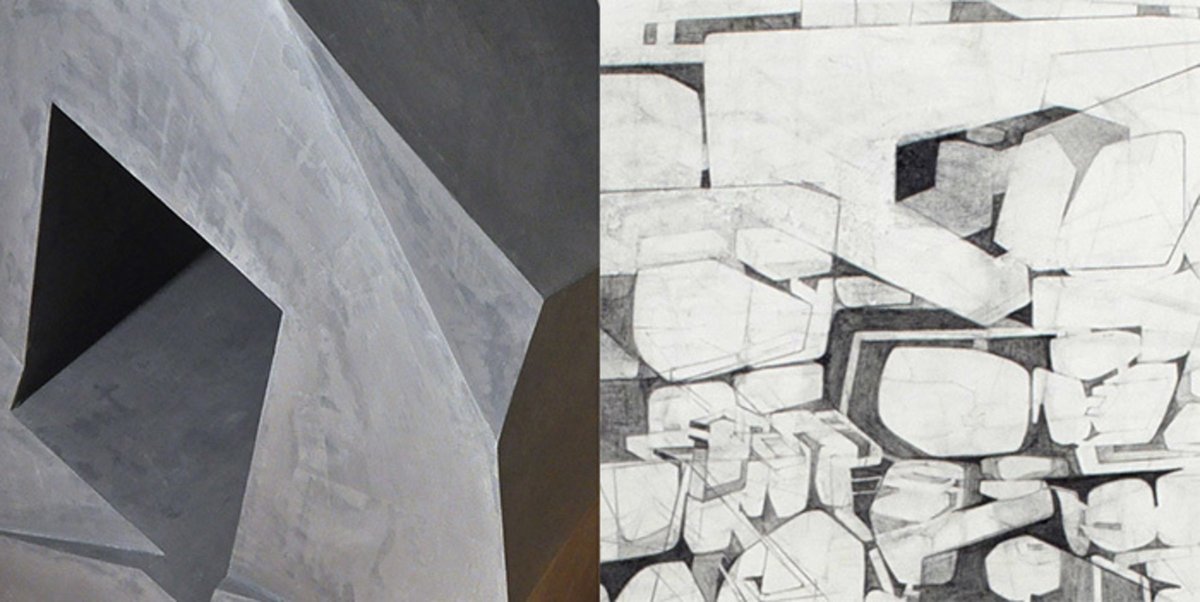 Atlanta-based Ann Stewart and New Yorker Steven Millar are nicely paired in an exhibition at Robert Henry Contemporary in Bushwick [through August 10] that is, at times, in Stewart’s case, as dizzying as its title, “Inside Outside Upside Down,” suggests. Both artists focus on the geometric and architectonic but with different means and toward different ends. Both also challenge the viewer’s perceptual attentiveness, offering quiet surprises.

Stewart’s black and white drawings and prints (she is also a painter and installation artist) are notable for their sensitivity of line and proliferation of forms, creating modular networks that oscillate between the architectural, the mechanistic, and the quasi-organic, as if her crystalline geometries were capable of growth spurts. Four of the works present are in pencil, two are aquatints; her mastery of line shines in both.

The obsessively delineated clustered structures—titled, when there are titles, things like Impromptu Superlabyrinth (2013) and Quantum Entanglement (2014)—suggest prototypes for a futuristic habitat or visualizations of a physics theorem. Consisting of units or cells overdrawn or connected by crisscrossing wiry lines, layered to create a multidimensional spatiality, erased and redrawn, the fine lines quivering, the tonalities nuanced, their greatest appeal might be their puzzlelike delicacy, their sense of being only temporarily poised, positioned. Exploding or contracting, the imagery does double-duty as a vision of microsystems or of the macrocosmic, the eye eagerly tracing, and losing itself, in its complex, mesmerizing passages.

Steve Millar, on the other hand, is showing three, well-made, freestanding sculptures (although he also works two-dimensionally), mimicking the heavy metal of Minimalism but are instead made of plywood, overlaid with either plaster, laminate, or thin steel, all in shades of gray. That is one of his perceptual conundrums, to confuse our sense of materials. Another is that they are not really about sculptural mass or weight but emphasize volume and space. And still another is their toggling between abstraction and representation.

Marker (2014) for instance, consists of a geometricized form that is also a boulder in which a pole, thrust through a sheet of metal like a flag, is embedded, in a streamlined version of a public monument, perhaps. Another faceted boulder, for (2013), made of plywood coated with powdery-looking, dark gray plaste, has a tunnel running through its center. It conjures the commemorative bronze plaques inset in stones frequently seen on New England commons, the names and events, more often than not, now forgotten, a commentary on forgetfulness and the transiency of history and memory.

Lilly Wei is a New York-based critic and curator whose writing has appeared in such publications as Art in America, Art & Auction, and Artnews.