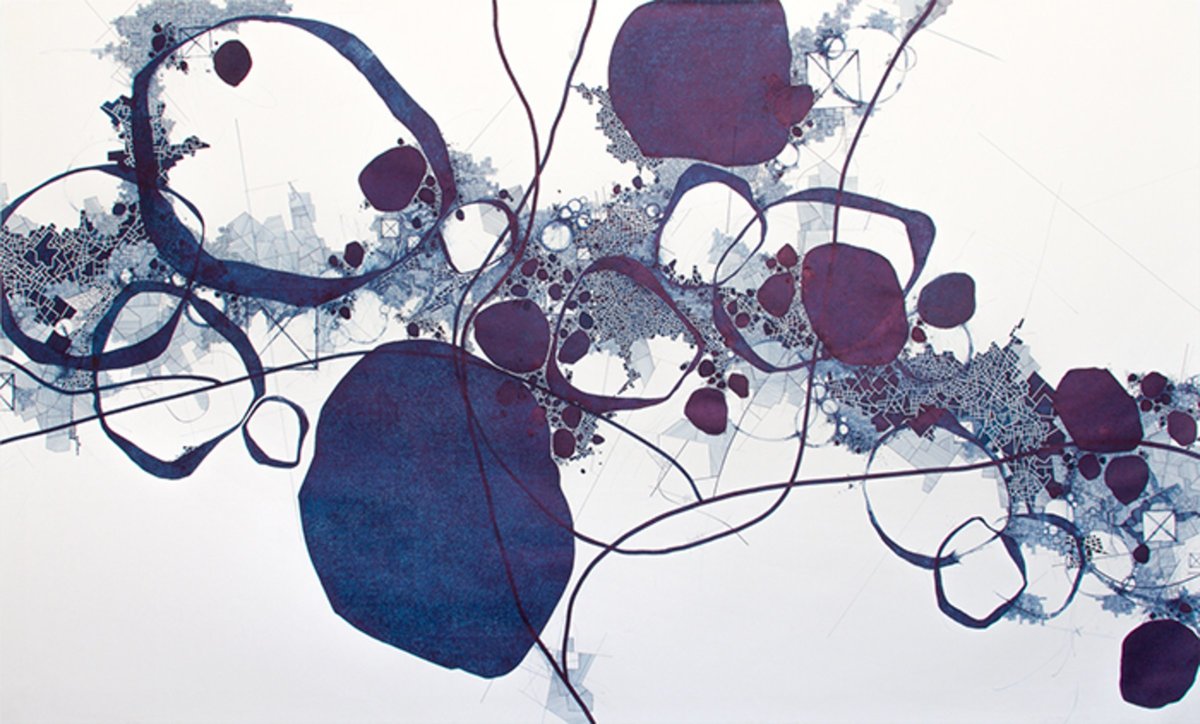 Link to The Brooklyn Rail >>>

The human compulsion for mark-making, so pronounced in many visual artists, contains an element of the territorial imperative. Both impulses, it seems, arise from a fundamental need to extend into and lay claim to space, to ceaselessly reshape the world in one’s own image. Such is also the sole purpose of virulent pathogens, and the complex metaphorical links between the three phenomena form the subject of Derek Lerner’s latest show of drawings. Arrestingly beautiful and charged with a restrained energy, the 12 works on view allude to the anthropogenic destruction of our planet, but with a richness and subtlety that places them well outside the realm of the didactic and firmly inside that of the poetic. Lerner’s drawings are fundamentally rooted in the language of abstraction, inviting introspection and leaving the viewer not with answers but with an enriched sense of the questions.

Entering the gallery’s main space, one is engulfed by a sea of blue. All the works consist solely of blue ink, applied with a fine roller-ball pen, on white paper. The density of the marks becomes emphatically clear as one approaches the pieces. Up close, each composition reveals multiple layers of minuscule lines coalescing to form irregular clusters of shapes, all overlapping and competing for space. While the lines vary from hatch marks to tightly woven scribbles to loose, agitated gestural strokes, the accretions they form suggest the gridded arrays of suburban sprawl as seen from satellites and the various microbes made visible through microscopy. This evocation of distance, of things seen from afar, sets a contemplative tone for the exhibition and encourages us to step outside our usual perspective. A strong reference to blueprints further underscores the work’s appeal to reflection, as the suggestion of planning and mapping invokes both human agency and an impending future; immediately we know we are implicated in the subject.  While the scale of the work varies widely, that of the compositional elements remains within a consistent range throughout. For this reason the larger drawings provide the most powerful impact. Measuring nearly 60 × 100˝, “Asvirus 54” (2014) is the show’s magnum opus. Over a diagonal arc of intricately linked geometric shapes that spans the entire picture plane, cell-like rings and microbial blobs dance, pulsate, and threaten to obliterate the geometry, the drama further intensified by several sweeping gestural forms issuing from above and below. As with most of the drawings, large expanses of untouched paper surround the riot of action, indicating either further escalation or imminent dissolution. Much like the human and non-human systems evoked by the shapes, the imposing physicality of the drawing exudes both hypertrophied growth and a sense of protracted, almost eonic, time. Clearly this is a composition months, if not years, in the making. One can imagine the artist incising each line knowing full well that each will be indelibly etched into the substrate. The arrow of time goes only one way.

What the smaller works lack in monumentality they make up for with amplified mystery. “Fracture 6” and “Fracture 8” (both 2014) are Lerner’s most recent works, and they are also the most abstract. Against dark, velvety fields of blue ink, exquisitely fine white slivers resembling hairline fractures bisect the picture plane. Here the pictorial drama is so understated that from a distance these works read as elegant, reductive abstractions. But, as with all Lerner’s work, closer inspection reveals mark-making so fraught that “elegant” ceases to apply. Both inky grounds are in fact densely compacted layers of scribbled lines that flicker and fluctuate like static electricity, recalling Giacometti’s angst-ridden drawings and Morandi’s quietly charged etchings. The fissures in the fields are none other than untouched white paper, further enriching the question of what is being ruptured by what.   The sense of conflict that pervades all the work is, fittingly, multilayered. As the geometric and organic shapes advance and retreat, a tense antagonism between humanity and nature suggests itself, a theme further evoked by the series title given to all but the two “Fracture” pieces. “Asvirus,” Lerner’s neologism formed from the words “as” and “virus,” corroborates what we’ve already suspected: not only are the works’ microbial shapes rather like viruses, cancers, and other pathogens, but so, perhaps, are we. Given the human conquest of the earth’s surface and our rapacious consumption of its resources, the comparison is hardly a stretch. But the deeper conflict comes from Lerner’s unsparing awareness of his own complicity as both an inevitable consumer and an artist with an irrepressible urge to fill space. Indeed, each drawing embodies a conscious struggle with a hypergraphia so intense it would probably, if left unchecked, leave no inch of the paper unmarked. The sense of restraint holding this work together is not a formal trope, but rather arises from a genuinely felt inner discord that we, in turn, recognize as our own.

This appeal to our own internal antagonisms gives Lerner’s work a profundity rarely found in contemporary “eco-art.” While still very much a plea for restraint, the work’s rejection of facile moralizing allows it to reach levels of consciousness beyond the fortress of ego. Defenses down, one becomes receptive to the kind of transformative insights work like this can offer. Only on these levels might one make the connection between Lerner’s luminous blue and that of the famous photographs of the earth seen from the moon. Who can look at those images and fail to experience a love for our host planet on which we—virus or no—so desperately depend? One gets much the same feeling from this show, and its effects run deep.