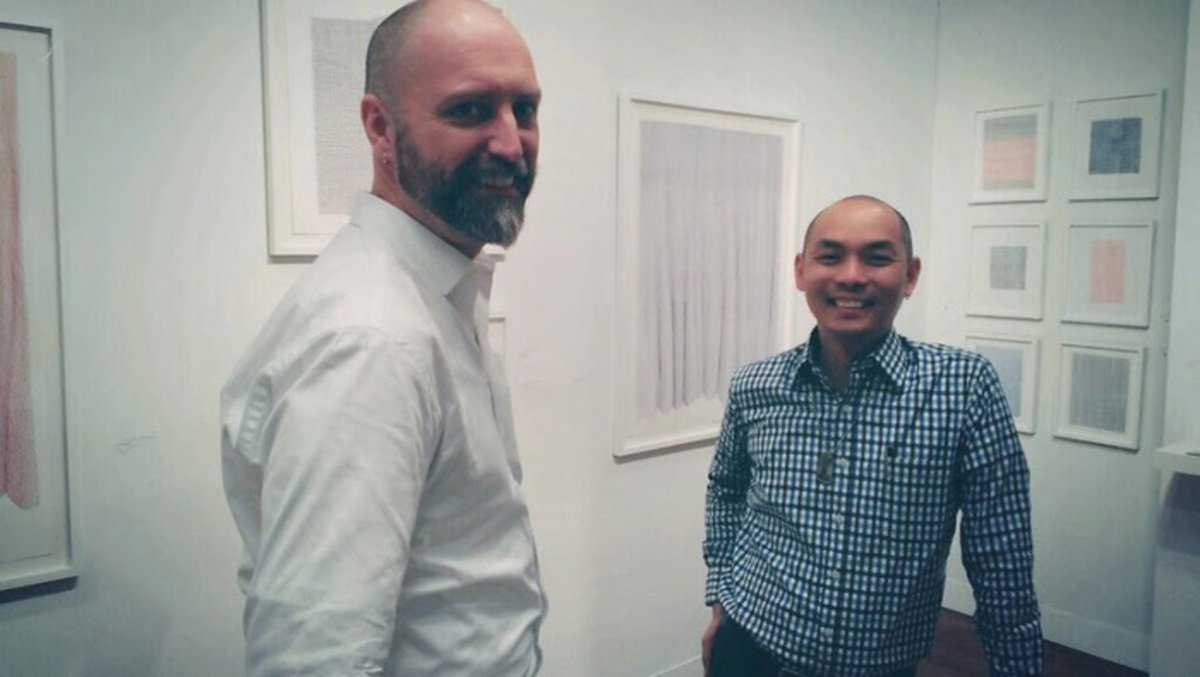 Link to The New Criterion >>>

Go see this year’s “Invitational Exhibition of Visual Arts” at the American Academy of Arts and Letters.1 Then go see it again. First off, this restorative show of more than 120 paintings, sculptures, photographs, and works on paper by thirty-seven contemporary artists offers an excuse to visit Audubon Terrace, one of New York’s most unexpected spaces, and one that deserves renewed attention. Located on a hillside of what was once John James Audubon’s family farm, this block west of Broadway between 155th and 156th Streets in upper Manhattan was purchased and developed as a cultural complex in the beaux-arts style by Archer Huntington, beginning in the first decades of the twentieth century. Its unusual location was perhaps a real-estate miscalculation, based on the belief that Manhattan’s center of development would continue to sweep northward, rather than skyward, as it soon proved to do through the development of the high-rise. But the relative remoteness of Audubon Terrace must now be seen as its saving grace. The pull of the skyscraper has never stretched the complex out of recognition like so many other institutions. Moreover, as the city’s peripheral places, extending in an arc from industrial Brooklyn to northern Manhattan and the Bronx, have now become new centers for living art in New York, Audubon Terrace feels like an old spirit with renewed vitality.

Little has changed since Huntington first commissioned his cousin, the architect Charles Huntington, to draw up plans for the site, save for the shifting ownership of some of the buildings (the Hispanic Society remains a must-see). A central sculpture plaza runs west down the middle of the block and provides access to an inward-facing limestone campus, far removed from the bustle of the street. Here, the most prominent work is the 1927 equestrian statue of El Cid by the trailblazing, and underappreciated, American artist Anna Hyatt Huntington, Archer’s wife, who also crafted the monument to Joan of Arc in Riverside Park.

At the far west of the courtyard, now regrettably looking onto the back of an apartment house, are the three buildings that make up the American Academy: on the right, one designed by Cass Gilbert, on the left, one designed by William Mitchell Kendall of McKim, Mead & White, connecting to a third building designed by Huntington that, until a decade ago, was the home of the American Numismatic Society. Together these three buildings provide extensive and gorgeous exhibition space for the American Academy. But heed this word of warning before making the trip to Audubon Terrace: the complex’s limited schedule (no doubt brought on by limited resources) means that the American Academy must keep European hours. The “Invitational Exhibition” remains on view through April 12, but for only three hours a day, from 1 pm to 4 pm, Thursday through Sunday, and a visit could easily take up that entire time.

The “Invitational” quality of this exhibition speaks to the benefits we still receive from the private associations and societies that came out of the beneficent American spirit of the late-nineteenth and early-twentieth centuries. Artist selection for the show is made through nomination by the 250 members of the Academy, who then award prizes on the chosen work and can also tap a fund, started by the American Impressionist Childe Hassam, to purchase and donate pieces to an American museum. Little is revealed to the public about the Academy’s exhibition process, other than the ten names on the “art award and purchase committee,” which this year includes Lynda Benglis, Catherine Murphy, Philip Pearlstein, Paul Resika, and Eric Fischl as chairman.

The fact that the “Invitational” is oriented towards the internal membership of the Academy as much as to the outside public gives this show its focus and reserve. With only a stapled checklist to go by, the display is a private assembly, not a didactic presentation. Without extensive labels and explanatory texts, the exhibition allows the visual and tactile quality of the art to speak for itself. Several artists have multiple works on view, allowing them to take on a narrative arc. Even more impressive are the visual conversations that take place in the arrangement among different artists’ work, with sculptures in dialogue with paintings in dialogue with works on paper.

The light-filled South Gallery, for example, with windows overlooking the Hudson River and the sloping hillside of Trinity Church Cemetery, positions the striped vinyl sculptures of Abbie Miller, Modern Duration (2014) and Currently Untitled (2013), which seem like they could unzip to reveal bodies beneath, against the tunneling color-lines of Gary Petersen’s acrylic and oil on panel. Petersen’s work in turn reflects the hollowed-out frames in Heide Fasnacht’s Room of Martyrs (2011–12), a sculpture made from a patchwork of photographs of a Nazi exhibition room of stolen art.

From here the exhibition winds through a warren of atriums, corridors, and smaller rooms. The mirrors by the artist Ultra Violet seem out of place, but I particularly liked the paintings by Rachel Malin, Trypophobia Tripping Phobia (2013) and Summer Warms (2013), whose gestural dots subtly dissolve into a unifying pattern. Cordy Ryman offers up five works of rough, painted blocks of wood with a sublime tactile quality. At the far end of these galleries is Wraith (2012), Ellen Driscoll’s haunting sculpture in suspension, a work of recycled white plastic that resembles an industrial landscape as seen through the Earth’s crust.

One detour among these rooms takes you to the studio of the composer Charles Ives (1874–1954). The room is preserved as it appeared at his home in Redding, Connecticut. As the recipient of both his royalty rights and over 3,000 personal artifacts, the Academy now awards several prizes for musical composition in his name each year. On April 13, at 3 pm, the Academy will host an Ives concert of his Violin Sonata #2 and his “Concord” piano sonata in its acoustically pristine auditorium. Free tickets are available by writing to events@artsandletters.org.

Across the courtyard, past an army of bibulous bronze figures by Bruce Gagnier, hard-edge sculptures by Don Gummer, and a diorama of an island cabin in miniature by Donna Dennis, is the large North Gallery room, divided into a central corridor and four radial spaces. The center space offers a tour de force of large gestural painting, with work by Joanne Greenbaum, Keltie Ferris, Kayla Mohammadi, and a hollow-core sculpture of wood by Karl Burkheimer. The side galleries show how an interest in form can be extended through a range of materials. I was especially mesmerized by Engulf (2013), a “two channel video of circles projected onto a nylon mesh” by Christine Tarquinio Sciulli, which carried over to the radiating wooden wall sculptures of Martha Clippinger and the dizzying abstractions of Sarah Walker.

It may just be coincidence that this exhibition opened in the first week of March, during the juggernaut of New York art-fair season known as “Armory Week.” If the timing was more than chance, it speaks to the pull of the market over the world of contemporary art. This is not to lament the convergence. The “Invitational Exhibition,” so set apart from the long march of the fair scene, offered welcome relief from Armory Week’s enervating din of conspicuous self-consumption. But it also wouldn’t be the only entity to be pulled in and compressed by the gravity of “The Armory Show,” located on the Hudson River piers. The ADAA “Art Show” at the Park Avenue Armory, which used to move freely over the calendar, now circles Armory Week in geosynchronous orbit. Meanwhile, an unaccounted mass of satellite fairs looks to draw a few pennies from deep space. This includes the punk Independent, with its herd of independent minds, the magic school bus of the SPRING/BREAK Art Show, and the (thankfully) “Last Brucennial,” with its laddish interpretation of a group show for women artists. Not since the Venice Biennale, Documenta, Art Basel, and the Muenster Sculpture Project aligned in 2007 have so many celestial bodies of art converged.

For me, one surprise came with the opening of the “Whitney Biennial” at the start of that week.2 Here is the exhibition we love to hate, whether it be too political, too apolitical, too insider, too out there, feature too few women, or display some combination of other grievances. I have gone from loathing the event to feeling sorry for the Whitney, which must play host to the art world’s rancorous jamboree every two years whether it would like to or not. This year, in what I consider a smart move, three outside curators were chosen to make the selection, and rather than collaborating on a single show, they each oversaw their own floor of the museum. The result added much-needed air to the hothouse of Biennial politics. It also gave us different perspectives and something of a choice.

I found little out of the ordinary as Stuart Comer, now the chief curator of media and performance art at MOMA, raised his freak-flag on the third floor. Meanwhile Anthony Elms, associate curator at the Institute of Contemporary art in Philadelphia, looked like he ran out of time on the exam on the second floor (although he must get extra credit for letting Zoe Leonard turn Whitney’s oculus into a camera obscura).

On the fourth-floor galleries, Michelle Grabner, an artist and teacher at the Art Institute of Chicago, presented what she hoped would be a “curriculum for other artists.” The surprising result was more induction than deduction, leading you into her ideas. Here I was impressed by how many artists were mining the history of modernism, not for postmodern ends, but for their own modernist means. A number of women artists, such as Alma Allan, Louise Fishman, Jacqueline Humphries, Pam Lins, Dona Nelson, and Amy Sillman, could be seen hacking into the machismo of Abstract Expressionism. Meanwhile, Philip Hanson created synesthetic paintings from the poems of Dickinson and Blake.

Grabner and her husband, Brad Killam, are the founders of two artist project spaces, one called The Suburban in Oak Park, Illinois, and the other known as The Poor Farm in northeastern Wisconsin. In case you didn’t realize it, these are not insider hotspots. They are not even “outsider” in an insider way. They are merely out there—which must account for why Grabner’s selection has been so successful. In the heartland, she taps a true art-world periphery and distills the Midwestern avant-garde. At the Whitney, she has found a similar truthfulness, and I was grateful for it.

Another surprise: the art fair called “Volta NY.”3 I had never seen this one before, but it went right where other fairs go wrong, and will be my first stop next year. Arranged in a loft space in SoHo, Volta puts the artists before the galleries, with each booth presenting a solo show. So rather than blending together, the artists stayed distinct, and each could tell a story. After seeing her work at Storefront Bushwick, I was happy to see more of the dense narratives of Jennifer Wynne Reeves at BravinLee. The same goes for the storied illustrations of Josh Dorman at Ryan Lee. Gallery Kogure, from Tokyo, exhibited remarkable trompe l’oeil drawings of family photographs by Takahiro Yamamoto. Asya Geisberg featured the whimsical abstract still lifes of Todd Kelly. HPGRP Gallery displayed the comic-book weapons of Nao Matsumoto, who is also the mild-mannered co-owner of Lorimoto gallery in Ridgewood, Queens. And three galleries from the Bogart Street building in Bushwick were there too: Slag Gallery with the fractured scenes of Tim Kent, Robert Henry with the obsessive woven drawings of Robert Lansden, and Studio10 with the intense remixing of religious texts by Meg Hitchcock. Which goes to show: vital art is all around us, even during Armory Week.

1 “Invitational Exhibition of Visual Arts” opened at the American Academy of Arts and Letters, New York, on March 6 and remains on view through April 12, 2014.