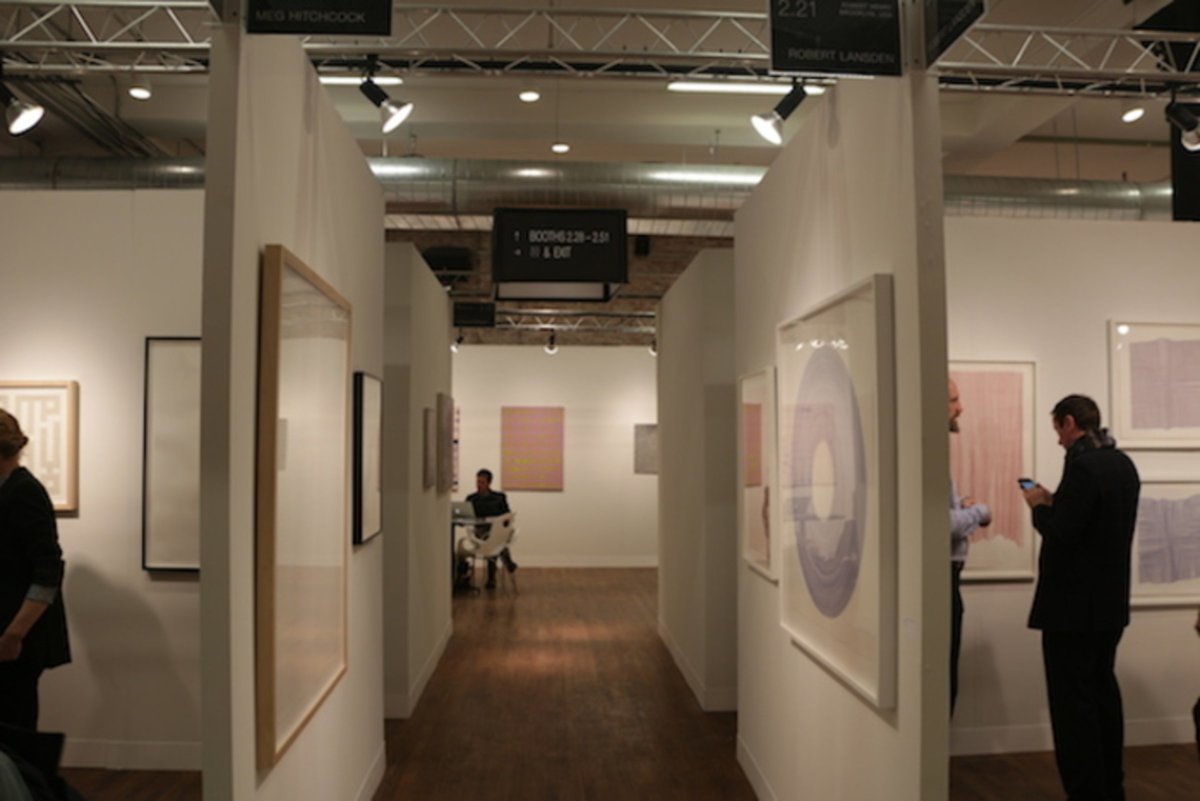 Booth view, Studio10 (left) and Robert Henry Contemporary (right) (all photos by the author for Hyperallergic)

Link to article at Hyperallergic >>>

A cynic might observe, correctly, that a large commercial fair is as good a place as any to be reminded that most art sucks. And Volta NY, an “invitational solo project fair for contemporary art,” is indeed a large commercial fair, one of the Armory’s main satellites. But by forcing each participating gallery to deliver the work of a single artist, its format prevents dealers from engaging in the anxious buckshot-hedging responsible for the special kind of kaleidoscopic clusterfuck that dominates the contemporary art fair. Which isn’t to say that Volta is a cohesive experience — far from it — but it is a very serviceable vehicle for experiencing artists, and there are a lot of them: 90 galleries from 5 continents are in attendance this year.

How, then, to organize such a diverse corps of practitioners? A representative from Volta explained to me that Amanda Coulson, the fair’s artistic director, evaluated the submitted solo projects, setting them up “almost like a conversation” in the multilevel space at 82 Mercer Street in Soho. An impossible task, but the result isn’t half-bad, even though booths feel rather paired-off, twinned by shared characteristics rather than grouped by any broader, more curatorially developed relationships.

At any rate, the gerund of the hour is selling, not curating, and selling they were. At Studio 10, owner Larry Greenberg told me that this was his Bushwick gallery’s very first art fair, and that his Meg Hitchcock show, packed in there practically salon-style, had been going briskly. (More bittersweet Bushwick milestones: Studio 10, along with several other galleries in the 56 Bogart building, have placed a group ad in the current issue of Artforum.) I have lauded Meg Hitchcock’s textual collage before, when her solo show was up at Studio 10 in October, and the selection on view here adds new work to the inventory remaining from that exhibition, making the booth an easy standout.

Two other presentations were unequivocally excellent: Ala Ebtekar at Charlie James Gallery of Los Angeles and Vyacheslav Akhunov at Laura Bulian of Milan. Ebtekar’s mixed-media work shuttles from intimate and analog to cosmic and digital; the large selection on view here showcases the breadth of the artist’s talent and the singularity of his vision. From figurative drawings on paper impeccably embossed with fractal arabesque patterns to C-prints and canvas overlays, Ebtekar renders the anxiety of context, of space and place, with a remarkable fluency. In “Coelestis (after Hafez)” (2013), pages from a 115-year-old edition of divan-e Hafez are mounted on canvas, then take on a digital arabesque chine-collé; a lightbox on the other side of the wall echoes the same pattern until it’s turned on, and a found movie poster, for H.G. Wells’s The Shape of Things to Come, shines out from underneath in mirror-image.

Vyacheslav Akhunov is a lesser-known artist and writer whose prolific output on notebooks during the Soviet period was in 2012 the subject of a monograph published by Germany’s Hatje Cantz. Laura Bulian gallery is showing a number of his works on paper from the 1970s dealing with the same, late-Soviet period. Often incorporating the image of Lenin, Akhunov’s work is remarkable here both for its age — the focus is decidedly contemporary at Volta — and for the thoughtful presentation of a relatively difficult artist whose work is deserving of (timely!) consideration.

Other compelling work abounds, from Irit Batsry’s projection-based images at Aut Aut Arte Contemporanea to Robert Lansden’s assuredly aleatory abstractions at Robert Henry Contemporary. Dual perspectives on the hermetic arrive via Katya Loher’s new-media fishbowls at C24 gallery and Takahiro Yamamoto’s clinically sentimental frames at Kogure gallery, while paper takes off in organic directions in Wilmer Wilson IV’s work at Conner Contemporary Art (comprising a performance piece), Elisabeth Sonneck’s preposterous gift-wrap installation at Brunnhofer Gallery, and Robert Larson’s Marlboro packaging collage-abstraction at CES Contemporary. Though Volta, like all fairs, is ultimately much less than the sum of its parts, those parts that do shine redeem the whole.